EXCILOR IS THE NEXT GENERATION NAIL FUNGUS TREATMENT

Only Excilor is made with TransActive technology – it penetrates without filing and acts fast to block the progression of the fungal infection. Results directly visible when the nails grows back healthy.

Effectively penetrating the hard nail surface is difficult. Many products require filling of the nail. Only Excilor is made with the unique TransActive penetration technology™.

Excilor is proven to penetrate deep into the nail within minutes without filing!

Excilor® is now enriched with nail lipids and biotine for supportive nail care during treatment. It helps to rebuild the damaged nail structure, therefore improving the cosmetic aspect of the nail and providing a stronger barrier against fungal infection.

EXCILOR IS AN EFFECTIVE TREATMENT

Clinical trials prove Excilor is an excellent choice as a product to treat onychomycosis.

The classic anti-mycotic molecules are so big, they cannot penetrate the nail without filing.
Excilor’s molecule is small allowing for optimum penetration and dries within seconds.(1)

Excilor is now enriched with nail lipids and biotine for supportive nail care during treatment. It helps to rebuild the damaged nail structure, thus improving the cosmetic aspect of the nail and providing a stronger barrier against fungal invasion. New Excilor also helps prevent the recurrence of fungal nail infection Excilor takes you only 1 minute a day and fits in with whatever your daily routine looks like !

Once they have established themselves under a toenail or fingernail, dermatophytes (fungi) feed on keratin, which is the substance that makes up the structure of the nail.

Left untreated, the nail’s condition will worsen and it will gradually change appearance: first white patches appear, then the nail turns yellow, starts to thicken, and eventually crumbles.

Excilor® Fungal Nail Infection is able to penetrate the nail and modify its microenvironment, making it hostile to fungal growth. The effects of Excilor® are visible as the infected part of the nail grows out.

It is important to start the treatment as soon as the first symptoms appear: the smaller the infected area, the shorter the period of treatment – and the faster the nail will regain its normal, healthy appearance.

Recommendation: as your nails grow, make sure you cut them regularly with nail clippers.

**Studies have shown that on average, a single applicator constitutes a full course of treatment for one infected nail. 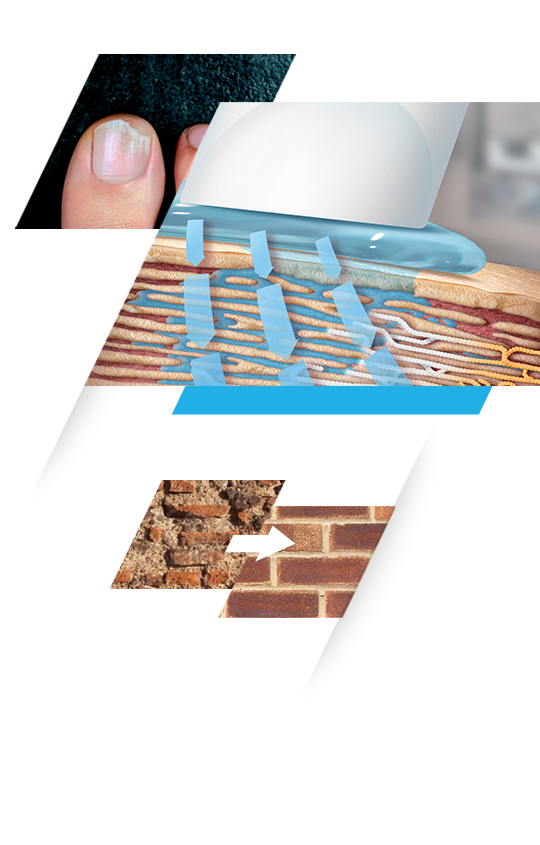